As part of the upgrades to Depot Park, three of the streets and sidewalks around the park were reconstructed along with landscaping. The sidewalks are wider than normal to make the area more pedestrian friendly. (Heidi Desch/Whitefish Pilot)

The Whitefish River passes under the Skye Park Bridge on a sunny morning. (Heidi Desch/Whitefish Pilot)

For more than three decades, Whitefish’s tax increment finance district has been the mechanism for funding major infrastructure and civic projects in the city aimed at eliminating blight while also stimulating the economy.

The city’s TIF district was created in 1987 when it was identified that infrastructure blight was a major deterrent to economic development in Whitefish. The district was later extended until its sunset last month.

City Manager Dana Smith said Whitefish’s district is one of the more successful in the state.

“The City Council in 1987 really had the foresight to plan for the economic growth and renewal and development within the district,” she said. “It has really improved our economy and job growth by having the infrastructure in place for private development to come in and invest in our community. The growth in our tax base of about $12 million really shows what can occur by reinvesting in a district.”

One of the largest projects funded through TIF was the construction of the new City Hall and attached parking structure that opened in 2017. The project at a total of $16 million was paid for entirely with TIF dollars.

Smith said if it weren’t for the TIF district, numerous city projects likely wouldn’t have occurred without an increase in taxes.

“Had the city not set aside that money, critical infrastructure projects would be costly and other than TIF to really spur that development it would have to come from bonds,” she said. “It was great we were able to build a new City Hall and parking structure without raising taxes for our community. The parking structure, specifically, has allowed economic growth and allowed more people to visit our businesses and stores, and that in turn increased job growth.”

TIF dollars have assisted a number of projects, including the construction of the Emergency Services Center, purchasing land for the Whitefish Community Library and O’Shaughnessy Center, infrastructure at the Wave, library and O’Shaughnessy, and assisted with improvements to Depot Park, City Beach, the Stumptown Ice Den and Armory Park. It has also been used with numerous street reconstruction projects including for Central Avenue and the Baker Avenue pedestrian underpass project.

Funds have also been designated for use at the snow lot for an affordable housing project.

City Councilor Andy Feury, at a recent meeting, pointed out that Whitefish is an example that TIF districts work well.

“We’ve done a lot of things and we’ve made this a better place to live because of the funds from TIF,” he said. “The private improvements that have occurred as a result are also proof. Generation after generation will benefit from it.”

A TIF district is a community economic development tool that captures the increase in  taxable value of a specific area above the base value, says Smith.

“As time goes on, the idea is that as growth occurs,  the additional funds collected by the city are reinvested and it spurs private development and that increases the value of the district more than it would have if the district had not been there,” she said.

The amount of revenue from property taxes going into the city’s general fund is set as the base amount at the time a district is created and then any additional revenue as property values increase or development occurs is then diverted to the TIF fund where it is saved for future use on urban renewal projects.

The total growth in value in the Whitefish TIF district over its lifespan of 33 years was 191% or $16.3 million.

In more recent years from fiscal years 2008 to 2020, the growth in value increased on average 10% each year, while outside the district growth was 4%.

Smith said it’s important to keep in mind that the TIF district includes most of the city’s downtown core, which has seen significant private investment since the economic recession of 2008 and 2009.

In addition to funds set aside for city projects, the TIF district also provided funds back to  the Whitefish School District. A total of $12.5 million went directly to the district based upon the tax value of the residential property in the district. In addition, City Council also approved $2.5 million in TIF funds toward the construction of the new high school building that opened in 2015.

When the city’s TIF district ended the funds that would normally be captured for economic development projects were released back to the taxing jurisdictions, including the city, the school district and Flathead County.

The city saw an increase to its general fund following the end of the TIF district.

Typically, Whitefish’s growth rate in a non-reappraisal year is about 2 to 3%, but with the end of the TIF district , the city saw a significant increase in newly taxable property.

“The benefit of a TIF district is that there is direct investment into an area to stimulate growth from the private sector including to stimulate job growth and economic growth,” Smith said. “Our taxable value increased about 49% this year. That growth wouldn’t have been that much without our investment and private investment into the district.”

The increase in value of 49% was due mostly to the TIF district expiration, but also growth in other newly taxable value from new construction, she notes.

Smith said that increase in cash to the city’s general fund as a result of the end of the TIF district, allowed it to decrease the total property tax levy in the fiscal year 2021 budget. For a home valued at $370,000, the savings is about $50 for the year.

Looking ahead to the future, the city is examining creating new TIF districts that would again be used for urban renewal projects like the one created in 1987. A $40,000 line item was included in the FY21 budget to hire a consultant to assist with the process.

A feasibility study completed last year, narrowed in on two potential areas in the city that could qualify for inclusion in TIF districts. One is suggested for along U.S. Highway 93 South and the other could include the Railway District and U.S. Highway 93 North.

“The TIF district that just ended was much larger, but we can still see an increase in value in those areas due to private development,” Smith said. “If we create those today we would see the benefit 10 to 15 years down the road.” 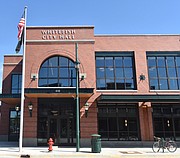 The Whitefish River passes under the Skye Park Bridge on a sunny morning. (Heidi Desch/Whitefish Pilot)