The Bulldog cross country team competed in the Mountain West Invite in Missoula on Saturday. It was a massive race with over 750 runners competing at the varsity level, representing over 100 schools.

“When I look at only Class A team results we are in great shape with less than five weeks until the State Championships on that same course,” said Coach Richard Menicke. “This was our state preview and the kids have this experience to reflect on and consider how they can better execute in late October.”

Bozeman and Hardin topped the girls team standings, followed by Hellgate, Mead and Flathead; Whitefish finished at No. 31 but was in front of most Class A schools. Individually, Annastasia Peters of Post Falls won with a time of 17:47. Lilli Rumsey Eash of Flathead finished in fourth place in 18:54.

Coach Menicke said Morgan Grube led the Whitefish varsity girls with a time of 21:11. Maggie Pulsifer, Hazel Gawe and Maeve Ingelfinger ran as a solid pack with only 15 seconds separating their times.

The boys team winner was Sentinel, with Coeur D’Alene in second and Lewis and Clark in third. The Whitefish boys team finished eighth, at the top of schools out of Class A.

“The boys varsity ran very well — eighth place overall as a team… kind of a big deal at this massive regional race,” said Menicke. “They packed up in groups of two and three, to have a gap of less than one minute from our number one to our number five finishers.”

Bulldog Deneb Linton’s time was 16:59, which placed him at No. 34 out of over 400 runners. Mason Genovese, Nate Inglefinger, Ruedi Steiner finished in quick succession followed by Ethan Amick in 17:54.

“Deneb and Mason led the boys, with very solid efforts from Nate and Reudi. Ethan Amick debuted at varsity and produced a great race as our number five,” Menicke said. “Our six and seven guys (Azurek Stolte and Zachary Chiarito) ran well and their role remains critical to supporting our success.”

Results of the Mountain West Invite: 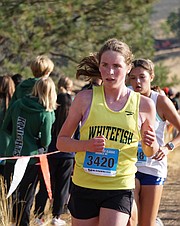 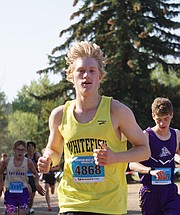