On Aug. 31, zebra mussels were found on this boat before heading out on Whitefish Lake. (Photo provided)

The zebra mussels found in Whitefish on Aug. 31. (Photo provided)

On Aug. 31, a mussel-infested boat attempting to launch in Whitefish Lake was stopped by the Whitefish Aquatic Invasive Species (AIS) Inspection Program. The fact that the boat had been in Lake Minnetonka in Minnesota just one week prior to arriving in Whitefish triggered an automatic decontamination.

According to Whitefish Community Services Coordinator Carla Belski, there was no one available in Whitefish to perform the decontamination so she directed the boat owner to Fish, Wildlife and Parks in Kalispell. FWP AIS Inspector Garland Hamilton went in on his day off to decontaminate the boat and found zebra mussels, an aquatic invasive species, on the watercraft. Montana FWP decontaminated the boat and locked it until it was ready to return to the owner.

“We have a really great partnership with Fish, Wildlife and Parks,” Belski said. “We work with Kalispell frequently.”

She added when either organization cannot perform a decontamination, the other will step in.

Mike Koopal, Whitefish Lake Institute Executive Director and Founder, said that this is a prime example of the importance of having the program in Whitefish.

“This incident demonstrates exactly why we have the Whitefish AIS program,” said Koopal. “Montana FWP and other project partners do an exceptional job of inspecting watercraft moving through Montana, but let’s face it, inspection stations are not open 24/7 and zebra mussels are tiny. The more eyes on these boats the better.”

Forty-eight mussel-infested watercraft have been intercepted this year by Montana FWP and project partners.

WITH THE NUMBER of boats needing to be decontaminated increasing, the Whitefish Lake Institute (WLI) is planning additional upgrades to the local Preventative Decontamination Station.

“We’re hoping it will be a lot more consistent in terms of reliability and water temperature,” Belski said. “(The new station is) a lot cleaner than the diesel engine that runs the unit we have been using.”

WLI has been operating with a portable unit that has a diesel burner and gasoline generator. Use of that unit requires an experienced watercraft inspector.

“It’s hard enough to try to figure out how to get the water on the boat without having to troubleshoot a diesel engine to get it started,” Belski said.

She said last week the starter was out and that the old machine seemed to break down a lot, and they would go through batteries all the time. The new solar unit is expected to be operational in the next few weeks. The portable unit will now serve as a backup and be available to local project partners.

The decontamination station in Whitefish is open weekends from 10 a.m. to 7 p.m. During the week, you need to call and make an appointment. 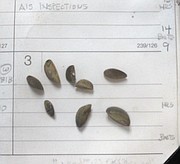 The zebra mussels found in Whitefish on Aug. 31. (Photo provided)