The upper terminal of the Snow Ghost Express lift being installed by the crew from Leitner-Poma. (Photo courtesy of Whitefish Mountain Resort)

Big Mountain has been a playground for young and old since this photo was taken in 1948 by Hungry Horse News founder Mel Ruder.

*Editor's note: This story has been updated since it was first published. The lift is predicted to open early this season, but not likely to be running on opening day.

Over the last 75 years since a ski hill was first established on Big Mountain above the small railroad and logging town of Whitefish, significant improvements and innovations have each etched their spot along the historic timeline of the ski resort.

Each project — such as building the first chairlift at The Big Mountain, the construction of the Summit House, or expanding on the backside by creating Chair 7 — has kept the skiing first. Forgoing most of the frills of a high-end ski resort has left room to make improvements that truly make the experience for the guests better. And coinciding perfectly with Whitefish Mountain Resort’s diamond anniversary will be the opening of the first six-pack high-speed chairlift on the mountain, a project that is predicted to be one of the most impactful in recent history.

“It’s really neat that [this lift] is coming to fruition in this 75th year…” Polumbus said. “It is going to truly have an impact on the mountain in a way that honors what this place has been about forever. You know, putting skiing first and doing things a little differently than other places, other ski areas, but having a lot of success.”

Polumbus says the Chair 4 project is a prime example of how the resort continues to reinvest in itself and in improving the experience for guests. Improvements that put skiers first are what the resort has been about since it opened in 1947, and Polumbus believes that the resort shows respect to its founders by keeping that mindset.

“It just honors what started with George Prentice and Ed Schneck and ‘Mully’ Muldown… they put the skiing first, it was a passion,” Polumbus said. “We don’t tend to get hung up on the bells and whistles that a lot of bigger ski areas get hung up on — we just keep the skiing first and so that’s what feels good about it.

“We feel like we’re, even here today in 2022, contributing to a mindset that was started 75 years ago. It’s our little contribution to the history,” he added.

And to the resort, putting skiers first means reinvesting in something that keeps the feeling that it's not that crowded and that you can still get plenty of untouched tracks without crazy long lines.

WHITEFISH MOUNTAIN Resort is more crowded than ever before, yet, the mountain has maintained a low-key, hometown resort vibe as much as possible.

Currently, the ski resort brings around 460,000 visitors to the valley each winter and is consistently ranked among the top ski destinations in North America. The resort must continue to attract new skiers to remain viable, but Polumbus says that is why investing in projects that spread people around the mountain more efficiently is essential to maintaining the experience the resort wants to provide.

Projects over the last 20 years such as building the Flower Point lift on the backside, moving Chair 5 to the East Rim and expanding Hellroaring Basin have all progressively accomplished the task of spreading skiers and snowboarders out across the mountain. But the new Chair 4, which will take skiers to the higher elevations of the mountain from the Base Lodge area, is a complete game-changer.

“What this will do, taking 2,200 people an hour out of that Base Lodge area is a huge impact in a positive way,” Polumbus expressed.

With the new lift, everybody starting their day from the base area will no longer have to ride Chair 6, a fixed-grip slower-moving chair, to get to Chair 1 or 2. That takes the pressure off those chairs heading to the upper elevations while returning Chair 6 to a more beginner lift that caters to people with less skiing experience.

“We’ve not only improved the uphill capacity and taken pressure off of key chairlifts, but we’re going to then also improve the experience for our newer skiers or younger skiers,” Polumbus said.

The $10 million project that will likely change how most guests plan their day is on track to start transporting skiers and riders up to Inspiration Ridge beginning early this season, not long after opening day which is scheduled for Dec. 8. The lift is the first of its kind for Whitefish Mountain Resort, but more importantly, it will have a tremendous impact on being able to spread skiers and snowboarders around the mountain efficiently and maintain the little-to-no lift line vibe of the resort.

Construction began in the summer of 2021 with groundwork and clearing the lift line. Throughout this summer and into the fall, much more dirt and concrete work had to be done prior to the towers going up in late summer. Throughout the fall the terminals were added, and now the last of the electrical work is being completed. Last week 47.5 tons of spooled-up steel arrived at WMR and the cable is being installed.

The cable has been a headache, says Polumbus, as it comes from Europe and was subject to supply chain issues. It shipped in early September but barely arrived in Whitefish last week.

Leitner-Poma is the builder for the project and the resort says the company has done an amazing job while being easy to work with.

The new lift will replace the old Chair 4, a smaller lift that was recently removed. The old Chair 4 was installed in 1978 before the Base Lodge existed. The Base Lodge has since become a busy area where most skiers start and end their day since a lot of parking is located in that area.

This is part one of a two-part series on the innovations, history and memories of Big Mountain for the resort’s 75th Anniversary season. Part two will focus on the history of the resort and the memories made throughout the years. 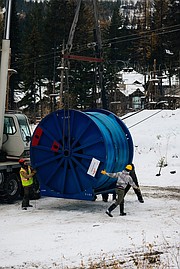 Big Mountain has been a playground for young and old since this photo was taken in 1948 by Hungry Horse News founder Mel Ruder. 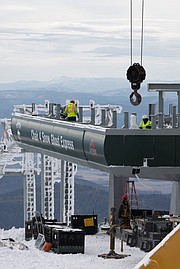