A kitten recovers after surgery at the Spay and Neuter Task Force during a cat clinic. (Julie Engler/Whitefish Pilot)

Dr. Kristin Hollenmans finishes the spay surgery and tatoo on a 5-month-old kitten at the Spay and Neuter Task Force. (Julie Engler/Whitefish Pilot)

A small unassuming bungalow on Trumble Creek Road houses the Flathead Spay and Neuter Task Force — the first low-cost spay and neuter clinic in Montana that formed nearly 25 years ago. Recently, the nonprofit clinic reached and surpassed a remarkable milestone of 50,000 spay-neuter surgeries.

Executive Director Mimi Beadles says they provide over 2,500 spay-neuter surgeries per year, one quarter of which they furnish at no cost mostly through the feral cat program, free services for veterans and early age surgeries. The task force is geared toward low-income pet owners, many of whom are on disability or public assistance, but no one is turned away because the goal is to provide services to as many animals as possible.

And despite huge increases in the cost of medical supplies over the last several years, the cost of the surgeries has remained remarkably low — $30 for cats and $55 to $65 for dogs.

When the nonprofit offered its first clinic in 1999, the county animal shelter’s euthanization rate was almost 60%. Over 1,800 animals were killed each year in the Flathead valley. Now, 20 years and 50,000 surgeries later, the rate is less than 4%.

“The solution to us was simple; reduce the number of animals being born,” Beadles said. “You can build a hundred shelters but the important thing is to turn off the faucet.”

The organization began as a chapter of the Montana Spay Neuter Task Force in 1998 and became the Flathead Spay and Neuter Task Force, a separate nonprofit, in 2001 with Beadles, Chrysta Bourne and three other women at the helm. Now, the task force serves a five-county area, as well as residents from Alberta and British Columbia, providing low-cost spay and neuters and other services.

Each year, Flathead Spay and Neuter is able to provide over 15,000 pounds of pet food which it distributes directly, during community events, and through the North Valley Food Bank and the Columbia Falls Food Bank.

The Task Force cares for 3,000 animals each year and operates on a yearly budget of $165,000. Beadles says this is possible because they are “extremely fiscally responsible.”

ACCORDING TO the Journal of the American Veterinary Medical Association, spay-neuter programs are a crucial component of community efforts to reduce the euthanasia of unwanted and unowned cats and dogs.

The association finds the pets most likely to end up in the shelter are pets from low-income households and unowned free-roaming cats. Beadles says 80% of the surgeries they perform are on cats.

Darcy Albert, founder of KittyMOM’s Rescue Organization, has been helping with the pet overpopulation problem for 17 years and frequently brings in carloads of kittens and cats for sterilization surgeries at the Spay and Neuter Task Force

“This year is horrible. People got cute kittens during the pandemic, now they’re losing their housing and leaving their pets and didn’t have the money to have them spayed and neutered,” Albert said.

Cats, unlike dogs, stay in heat until they are bred and they are able to have three litters a year; this time of year almost every cat is in heat, Beadles said.

Cats are able to be fixed when they reach eight weeks of age or two pounds, whichever comes first. Dr. Kristin Hollemans has been volunteering at the Flathead Spay and Neuter Task Force since they began and during a typical cat clinic will perform 40 to 50 surgeries. She said the time to get them spayed is before they have their first heat, which can be as young as four months.

Flathead Spay and Neuter offers cat clinics twice a month and dog clinics once a month. Dr. Heather McEvoy, owner of Flathead Veterinary Wellness & Rehabilitation Center, began volunteering at the Task Force when she was 13 years old and now she is their dog veterinarian. The procedure on dogs is more time-consuming than on cats but McEvoy is still able to perform about 20 operations during a dog clinic day.

Though spaying is considered a routine procedure, it is an involved surgery that no one at the task force takes lightly. The fact that spaying and neutering is the best way to “turn off the faucet” is what inspires the doctors and volunteers to do the work.

“It’s just heartbreaking that there are just so many pets out there. In general, as a country, we’re just not there yet – breeding regulations are poor to none,” McEvoy explained. “It’s a passion – helping with the population and trying to get as many pets that are already born into homes before we start having more.”

The clinic also offers special pricing for complete litters of dogs or cats.

“When people bring in the mom, we will alter the complete litter free,” said Beadles.

Spayed pets go home with a small incision and a tiny green line, a tattoo that is now the universal sign for pets that have been altered since scars are usually difficult to see. Microchipping and vaccines are offered at the same time at a cost of $5 each.

“This is what every pet should strive for, a teeny incision and a little green tattoo. That’s perfect,” Beadles said.

The clinic has an autoclave room and an attendant to assure that each animal has a sterile pack of instruments. There is a quiet room for pets awaiting surgery and a pre-op area where pets are sedated, shaved and prepped for surgery. After the procedure, dedicated volunteers tend to the animals in the recovery area where they are checked for ear mites, receive a shot of Ivermectin, if needed, and get microchipped, if requested.

VOLUNTEERS DONATE in excess of 5,000 hours per year helping at clinics, Community Connect events, fundraising, caring for resident cats and performing a host of other jobs. Some of them have been with the task force since day one, including Robin Tucker who was helping homeless cats in Hungry Horse before joining Beadles 21 years ago.

Joanie Erickson, a retired vet tech, worked the check stations during Iditarod races in Alaska and has been with the task force for over 10 years. In 2010, she lent her expertise when several feral huskies were involved in a local cruelty case. Later that year, Kitty Leu started volunteering when the task force took in 116 cats from a hoarding situation.

“It's a close group of volunteers. They see the vision, they see what we've accomplished — it's pretty amazing,” Beadles said.

The volunteers are a tight-knit group with a shared passion who have become close friends over the years and often go camping together in the summer. Beadles believes in showing appreciation to them by feeding them three meals a day and says that after a clinic, the crew will stay for hours, eating, drinking wine and enjoying one another’s company.

THE FLATHEAD SPAY and Neuter Task Force was the first permanent spay-neuter clinic in the state and its mission is to reverse universal acceptance of killing as a solution to pet overpopulation, using low-cost spays and neuters, education and community involvement.

The demand for surgeries in the Flathead keeps increasing, in part because Covid caused veterinary clinics to curtail elective surgeries for months, and in the past two years, veterinary costs and wages have risen. The increase in requests means clients must often wait two to six months for an appointment at the Spay and Neuter Task Force.

Though the problem of pet overpopulation is overwhelming, Beadles and her team of volunteers will keep working to fix it, one surgery at a time.

For information, or to make an appointment or donation, visit www.flatheadspayneuter.org. 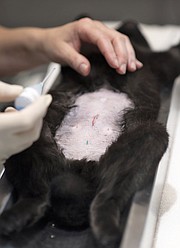 Dr. Kristin Hollenmans finishes the spay surgery and tatoo on a 5-month-old kitten at the Spay and Neuter Task Force. (Julie Engler/Whitefish Pilot) 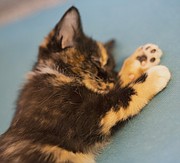 A kitten recovers after surgery at the Spay and Neuter Task Force during a cat clinic. (Julie Engler/Whitefish Pilot)