Whitefish's Ainsley Scott gets past Corvallis for a fast break opportunity on Friday night in Whitefish. (Whitney England/Whitefish Pilot)

Whitefish's Jude Perry dribbles through pressure during a game against Corvallis on Friday night in Whitefish. (Whitney England/Whitefish Pilot)

Bulldog Bailey Smith looks for the basket during a game against Corvallis on Friday night in Whitefish. (Whitney England/Whitefish Pilot)

A 17-point first quarter helped Whitefish establish an early lead that would hold up for the remainder of the game against Corvallis on Friday.

The Lady Bulldogs came out with hot shooting and tough man-to-man defense that held the Blue Devils to just 8 points in the first half. Whitefish carried the momentum throughout the game to win 49-27 in front of its home crowd.

“I was really excited about our game against Corvallis Friday night,” Whitefish head coach Bob Bolam said. “I challenged the girls to come out and play some tough man defense and… from the get-go they did a really good job of taking Corvallis out of what they wanted to do offensively. We held them to 8 points in the first half, so really a good effort.”

Offensively, Whitefish moved the ball well and ran successful plays from the point behind the lead of Hailey Ells and Brooke Roberts. Bulldog leading scorer Bailey Smith hit some 3-pointers and the posts did well to bring pressure to the paint.

Smith led the team in scoring with 18 points and Jude Perry scored 11. Ainsley Scott and Roberts each scored 8 points as well.

“I thought it was a really well-executed game by our starting five throughout the night,” Bolam said. “Really happy about that and now we’re looking to continue that.”

Whitefish was supposed to travel to Browning on Saturday, but the game was canceled due to winter weather.

The Lady Bulldogs are now 3-1 so far this season.

Whitefish was set to play Hamilton on the road on Tuesday after press time. Then the Bulldogs will prepare to play Eureka for the second time this season. Bolam is preparing the team for both and then welcomes the winter break before conference play begins in January.

“We want to take every game and every opponent as a worthy opponent, that’s what we’re going to look at,” he said. “We’re excited to play both of these games then have a little time off before we come back and get ready for some league action.”

Whitefish will play in Eureka on Thursday at 5 p.m. Then action will resume on Jan. 3 against Ronan.

Bulldog Bailey Smith looks for the basket during a game against Corvallis on Friday night in Whitefish. (Whitney England/Whitefish Pilot) 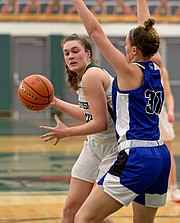 Whitefish's Jude Perry dribbles through pressure during a game against Corvallis on Friday night in Whitefish. (Whitney England/Whitefish Pilot)