Significant moments in sports through the most uncertain year

Jacob Polumbus rifles a pitch in the first of two Sunday battles against the Libby Loggers. (Daniel McKay/Whitefish Pilot)

The Whitefish High School Bulldog boys swim earned the Class A state champhionship last weekend at Whitefish’s Kay Weaver jumps off at the start of the 50 free at the All-Class State Tournament in Great Falls. (Photo courtesy Corey Botner)

In the year 2020 local sports started off like any other, however as the COVID-19 pandemic swept across the world almost all normalcy dissipated — sports and clubs included. Although navigating through these trying times was difficult according to many coaches, athletic directors and sporting organizations, with a bit of adaptation many noteworthy sporting feats still occurred.

The Bulldogs boys swim team went from finishing last at state the previous year to champions for the AB division in 2020.

Whitefish’s Preston Ring defended his 100 free title and Logan Botner defended his 100 backstroke title while also winning the 200 free race. Nicholas Starring won the 500 free and the boys won two relays as well on their way to becoming champions.

The girls were edged out for the team title by Billings Central, and finished second at state. Ada Qunell defended her 200 IM title and also won the 100 backstroke. Helena Kunz won both the 100 free and 200 free state titles.

The speech and debate team had success all season long and capped it off with a second-place team finish at state and five individual champions in early February. Whitefish finished behind Columbia Falls, who was the repeat champion.

Just looking at records alone, it wouldn’t appear that Whitefish’s basketball teams had enough success to include them in the yearly sports highlights. However both the boys and girls teams ended the season with program-boosting wins.

After the Lady Bulldogs got off to a slow start, the girls finished the year strong by making it into divisionals. The biggest highlight was in the first round of Western A divisional play when Whitefish upset the top seed from the Southwest A, Dillion, 41-37.

The boys had a huge 57-31 win over Columbia Falls in a divisional play-in game in order to qualify for the Western A Divisional Tournament.

Although it is not as much of a highlight, it’s still noteworthy — high school spring sports were cancelled. After the COVID-19 pandemic made its way into Montana in March MHSA cancelled the spring season.

This was devastating for Whitefish athletes, especially the seniors in track and field, softball and tennis.

After all spring sports had been cancelled due to the pandemic and the National American Legion dropped all sponsorship of teams for 2020, the Glacier Twins persisted alongside many other Montana baseball teams.

The Twins were able to carry on a seemingly almost normal season in which the baseball team from Whitefish went undefeated in the regular season while going on to become the West A district champions. On a hot day in early August Glacier defeated the Bitterroot Bucs 6-5 in a close back-and-forth ballgame.

The Twins went on to the Montana Legion State A Tournament where they won their first round matchup before dropping the next two.

Progress on the proposed new Bulldog Sports Complex was slowed due to the pandemic, but in August the architects on the project presented the updated design to the Whitefish School Board.

The committee working on the stadium project had selected a “separated facility” concept, which would put the track on the north side of the property near the high school with the football and soccer combination turf field centralized within the area. The potential timeline for the project predicted a bid would go out in early 2021.

The Bulldog boys soccer program extended its dominating reign of Montana Class A soccer as it recorded another undefeated season and took the state title for the third year in a row.

Whitefish’s 44-game undefeated streak was capped by a dominating win over cross-town rival Columbia Falls in the State Final at Smith Fields in October.

Whitefish senior Brandon Mendoza was the top goal scorer in Class A and the Bulldogs as a team were “sneaky good” on defense only allowing five goals all season.

Girls soccer fights to make it to state final

The Whitefish girls soccer team had an unbelievable year as well. The Lady Bulldogs went undefeated throughout the regular season and had a program-boosting win over Billings Central in the Class A semifinals.

The girls then traveled to Laurel for the State Final on Halloween and it ended in a heartbreaking overtime loss to the Locomotives. Whitefish junior Emma Barron had netted two goals in the game and the Lady Bulldogs led by two with under 17 minutes remaining, but Laurel roared back to become repeat champions.

Bulldog golfers crushed the competition all season long before taking the team title at the Class A State Championship.

The team was led by senior golfer Cameron Kahle who also became a back-to-back state champion in the individual results after winning on the first playoff hole against his teammate Billy Smith. The boys team that won the title included Kahle, Smith, Marcus Kilman, Johnny Nix and Bjorn Olson.

The Whitefish High School Bulldog boys swim earned the Class A state champhionship last weekend at Whitefish’s Kay Weaver jumps off at the start of the 50 free at the All-Class State Tournament in Great Falls. (Photo courtesy Corey Botner) 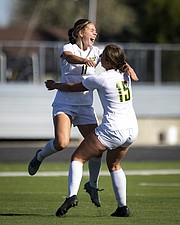 Jacob Polumbus rifles a pitch in the first of two Sunday battles against the Libby Loggers. (Daniel McKay/Whitefish Pilot)