Marguerite Helen Schenck passed away at her residence at The Springs in Whitefish on Dec. 8, 2020, with three of her children by her side. She was 94.

She was born to Frank R. and Anne M. MacDonald on June 28, 1926, in Whitefish. She attended Whitefish schools and graduated from Whitefish High School in 1944. She earned her R.N. through the Sacred Heart School of Nursing in Spokane in 1947.

While celebrating her 21st birthday at the Cadillac Bar in Whitefish, she was introduced to Ed Schenck, who had come from Great Falls with the dream of building a ski resort. She worked briefly for a hospital in Seattle, but returned to marry Ed in 1948. They had five children and raised them in the home where Marguerite lived for 63 years. Ed died in 1982 after achieving his dream.

She served as a nurse at Whitefish’s John B Simons Hospital and North Valley Hospital, as well as at local clinics. She was dedicated to her profession, and never refused when called upon as a special duty nurse, even when her children were young. When her youngest started school, she began working full time—on the night shift so she could spend time with her family.

Marguerite’s life was characterized by sharing and caring, first with family and always with her community.

She used her considerable energy in raising her children during earlier lean years. She was a good cook, and taught her children to crave her pot roast, spaghetti, and beef stew. The Schenck dinner table was a daily ritual, with everyone reporting on their day and the parents providing guidance in everything from table manners to how to survive in the world. A devoted mother, Marguerite was a Cub Scout and Girl Scout leader, taught Sunday school and attended all of her children’s sports and extracurricular activities.

She was an active member of St. Charles Borromeo Catholic Church all her life, often assisting in projects such as dinners and fundraisers, and as a greeter. She volunteered for many other organizations, including the Red Cross, the Cancer Society, Flathead County Health Department, North Valley Hospital, and Hospice, utilizing her nursing background. She volunteered at the Stumptown Historical Society Museum, where she worked as a docent into her late 80s. She received many awards, among them the Beta Sigma Phi’s Woman of the Year in 1993, the Florence Nightingale award for nursing, and the Great Whitefish Award for community service from the Whitefish Chamber of Commerce in 2008. The Winter Carnival honored her as Grand Marshal of the parade in 2008.

Though she had little time or means to travel when she was young, she saw the world in later life, with itineraries taking her to Europe, Russia, China, Ecuador, Israel, Australia and points in between. Her children are particularly grateful that she brought them to her parents’ ancestral home in Prince Edward Island, Canada, in 1994 to introduce them to their many relatives there.

She was preceded in death by her husband, Carl E. (Ed) Schenck , her brothers Francis J., Reginald J., and Dr. Ralph F. MacDonald; and many wonderful lifelong friends.

She is survived by her children: Mary Anne Miles of Whitefish; Suzanne Schenck of San Francisco; Karl F. Schenck (Susan) of Whitefish; Ronald E. Schenck (Melissa) of Valparaiso, Indiana; and Eric (Sheril) Schenck of Whitefish; by her brother, Michael R. MacDonald (Patrice) of Fort Benton, and by her sister-in-law, Arlene Priest of Billings. Her devoted grandchildren include Jeremy Miles (Kathryn) of Spokane, Ericka Schenck of Missoula, Chelsea Lefcourt (David) of Whitefish, Katrina Moseley (Scott) of Whitefish, Madeline Schenck of Charlotte, North Carolina, Matthew Schenck of Marysville, Michigan, and Robert Schenck of Melbourne, Florida. ‘Gramarg’ will be missed by her precious great-grandchildren: Henry, Edwin, Erin, Simma, Claire and Colin. There are also numerous nieces and nephews, and uncountable cousins and their offspring in Canada.

The family thanks the staff of The Springs, her residence in recent years, for their attentive care, especially in her final weeks, and Frontier Hospice for their care in assuring she was comfortable in her last days.

The family is not planning a service at this time and hopes to celebrate Marguerite’s life at a later date. Memorials can be sent to a charity of the donor’s choice.

Austin Funeral & Cremation Services in Whitefish is caring for the family. 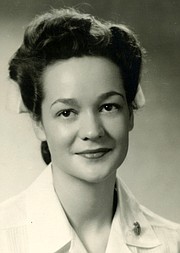