Lady Bulldogs fire up for overtime win in semifinal game

Bulldog soccer players Katie Benkelman, Norah Schmidt and Rya Hirsch walk off the field together after their win on Saturday against Hamilton in the semifinal game. (Julie Engler/Whitefish Pilot)

Whitefish keeper Norah Schmidt knocks away a Hamilton shot during the second half of the State A semi-finals Saturday. (Jeremy Weber/Bigfork Eagle)

The Whitefish girls soccer semifinal game included overtime on Saturday at Smith Fields and the Bulldogs beat the Hamilton Broncs, 5-3, to secure a spot in the state championship game.

The contest followed a scorcher of a game the weekend before when the Bulldogs beat last year’s state champion, Laurel, in penalty kicks.

“Our team is starting to have an epiphany that we are dangerous, we are formidable, and we can compete at the highest level when we’re on and we play as a team, trust the system and play to our strengths,” said Whitefish Coach Roland Benedict. “We’re incredibly dangerous and formidable.”

Hamilton scored first in the first half under dark clouds and a cold drizzle. The Bulldogs turned up the heat and controlled the play for most of the first half. Team captain Maya Lacey scored for Whitefish in the twenty-sixth minute to tie the game at one each going into halftime.

The second half saw Whitefish exhibit confidence and crisp passing, despite the wet conditions, as they scored twice more, taking a 3-1 lead. Hamilton turned up the pressure, seeing far more possession after the sixtieth minute and scored with five minutes to go in the game.

Whitefish was unable to stop Hamilton's persistence and offensive determination. Additionally, the speedy play of Hamilton’s Hannah Hughes on the left wing spurred the Broncs.

The Bulldogs had a couple promising corner kicks at the end of the first half but were unable to cash them in. One did hit the back of the net, but the play was called offside.

The Broncs scored again with seconds left in regulation, tying the game 3-3 off a corner kick that ping-ponged around in front of the goal and was eventually pushed out but not far enough.

“She (Schmidt) wasn’t as tested in this game… but it's a fantastic thing… when you know you have a goalkeeper that can make saves for you and bail you out when an error, a mistake or just a really great attacking play happens and somebody capitalizes. She can… bail you out,” said Benedict. That’s what great goalkeepers do (and) it’s special that people are getting to see how talented she is. And she’s still only a junior.”

Coach Benedict had glowing words for every player and said that everyone had their moments where they were integral.

“Maya Lacey has battled a few injuries this year and she was just fantastic, got a goal, had an assist, created numerous chances for us,” said Benedict. “Little things she did in terms of positioning, stopping the play and then controlling the tempo… taking passing lanes away, little things like that are just exceptional, it’s what you want from a senior captain. (She) really stood out in a lot of ways and held us together and was really a rock and a leader for us.”

He said the team will work on sticking with their style this week and on game management in preparation for the final game against Billings Central. Benedict said the girls understand the game and how every action they take on the field has a ripple effect.

“I think the biggest issue for us in that game was once we got to 3-1, the girls felt very confident and secure and they tried to put the game away in the next seven minutes - score another couple of goals and put it away,” Benedict noted. “We went away from what we were doing well, the way we play, and our style.”

The Whitefish Bulldogs will host Billings Central for the state championship game on Saturday, Oct. 29 at Smith Fields. The game begins at 11 a.m. 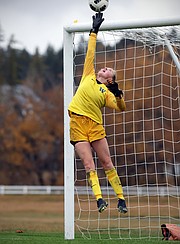 Whitefish keeper Norah Schmidt knocks away a Hamilton shot during the second half of the State A semi-finals Saturday. (Jeremy Weber/Bigfork Eagle)

Bulldog soccer players Katie Benkelman, Norah Schmidt and Rya Hirsch walk off the field together after their win on Saturday against Hamilton in the semifinal game. (Julie Engler/Whitefish Pilot) 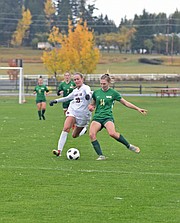 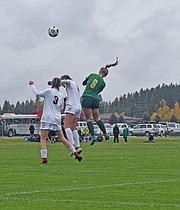