A lounging area in the back of Slow Burn Records in Whitefish. (Courtesy photo)

For several years, Mike and Dyan Colby often traveled from Texas to spend time in Whitefish and enjoy the rhythm of mountain living. Now they own the only record store in town, Slow Burn Records.

The store’s Director of Operations, Madde Borg, explained that when the Colbys were in town, Dyan would stop into Spanky and Gus’s — the funky record store that was previously on Spokane Avenue next to Jersey Boys Pizza. She enjoyed bringing her kids, telling them about music and sharing the thrill of looking for unique finds.

When she learned Spanky was closing her store, Dyan approached Mike with the idea of buying it; they purchased the store at the beginning of 2021 and it opened this April. Currently, the store is full of Spanky’s collection, about 3,000 albums, but Borg says the plan is to curate their own collection to best suit the desires of the community.

“Bernard Jones is the general manager and he’s been writing down titles that customers suggest so we get a better idea of what the community wants,” said Borg.

Music is the first thing one notices upon entering Slow Burn. The atmosphere is hip and breezy with records displayed on both sides and in the center of the store. There is a place to sit comfortably near the rear of the store and read liner notes or chat, while the front windows form a backdrop for performing musicians.

According to the Recording Industry Association of America (RIAA), in 2020, vinyl sales outpaced CD sales for the first time in 34 years. Music buyers in the United States spent over $619 million on vinyl LPs and EPs.

Reasons for the resurgence of vinyl vary, depending on who you ask. Some mention the ritualistic type feel of placing the needle on the record while others note the scratchiness, the sound quality or the time commitment of listening to an entire album.

“For the older generation, it's like a trip down memory lane and for the younger generation, it’s just an experience,” Borg said. “It’s totally different than popping in a cd or getting on Spotify.

The sound is different, the experience is different and I think that’s what a lot of people are attracted to."

Slow Burn Records partnered with Eyehear Technology Group to create six listening stations in the store so customers can listen to albums before making a purchase. People looking to buy a record player are directed by the store to contact Eyehear.

One of the Colbys’ major goals with the store is to support up-and-coming artists in the music community. Slow Burn Records is the premier sponsor for the Whitefish Songwriter Festival, a three-day event wherein musicians from around the country come to perform at bars, restaurants, theaters and coffee shops in town.

The festival is a production of the Rocky Mountain Songwriter Festivals, Inc., a nonprofit dedicated to promoting music education. Many of the proceeds from this festival will go to promote music education in Whitefish and Flathead Valley. This marks the second year for this annual event and the second time Slow Burn has been the premier sponsor.

Each Tuesday evening of the summer, while the Farmers’ Market is going, Slow Burn hosts live music. Michelle Rivers played last month and Hanna King is the current featured artist.

“The goal is to bring in artists, get their names out there and (provide) a place to perform,” Borg said.

The store is also planning to host an open mic night to give local talent more exposure. Borg says they are discussing possible collaborations with their wine store neighbor, Unleashed: A Winery, including a “Vinyl and Vino” night and other special events.

Slow Burn’s grand opening is on July 7 with a ribbon-cutting ceremony at noon.

Immediately inside the front door of the store, a mission statement of sorts greets visitors. It echoes Borg’s words about the experience of listening to records.

“The slower you listen to an album the more you take it in.” 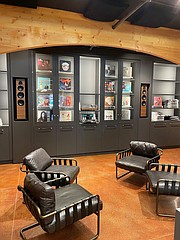 A lounging area in the back of Slow Burn Records in Whitefish. (Courtesy photo) 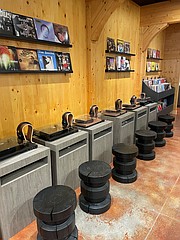