The Whitefish boys tennis team earned a State A title last week — and they didn’t take the simplest path to get there either.

All five of the Bulldog’s state-qualified players found themselves in the consolation bracket early in the tournament and the situation wasn’t looking up for a spot on the podium. However, Whitefish’s No. 1 singles Joe Brandt and No. 1 doubles team Aaron Dicks and Mason Kelch never stopped fighting through the tournament.

That paid off as the Bulldog boys earned the Class A Tennis Championship as a team on Thursday and Friday in Bozeman.

Whitefish is co-champions with Billings Central as the two teams tied for first with 18 points each. The race was close and every point made a difference as behind them three teams finished with 17 points, all tying for third.

Going into the state tournament, Whitefish head coach Chris Schwaderer was just hoping for some sort of trophy and they came away with first place.

“Even after the first day I didn’t think we were in great shape for any kind of a trophy, and then when day two rolled around it was just amazing how the guys stepped up,” Schwaderer said.

On the singles side, Whitefish senior Joe Brandt won 6-2, 6-0 over the top seed out of the Southeast A from Hardin. He dropped a tough match to Havre in the quarterfinals. When he headed into the consolation bracket, Brandt started rolling all the way to the third-place match where he faced Ryan Beagle out of Libby; Brandt placed fourth and is an all-state player.

“He just played some of the best tennis of the year, he was so focused and so committed,” Schwaderer said of Brandt.

Schwaderer added that once the players entered the consolation bracket, it meant a lot of matches and a tough road to placing.

Whitefish’s No. 1 doubles team of Aaron Dicks and Mason Kelch had a similar experience. The duo won easily in the opening round but lost to Hamilton in a three-set match, 4-6, 6-1, 6-3. Schwaderer says the team that had hoped to compete for the doubles title had to change its course after the loss.

“When they lost to that Hamilton team it was kind of disheartening, it took them out of the running for a potential doubles title…” the coach said. “They absolutely had to regroup and commit themselves to finishing as high as they could.”

He said they took a positive attitude into the remainder of the tournament and battled through round after round to finish third — the highest they could have finished with one loss. The loss to Hamilton was a hiccup, but keeping their head in the game paid off. Their placing was essential to Whitefish winning the team title as well with the final team scores so close.

Additionally, Whitefish’s doubles team of Fin Stagg and Jesse Burrough also played in the tournament. As the four seed, they had a tough go of it, but Schwaderer says they played well despite finishing 0-2. They took a competitive team out of Havre to three sets — a team that eventually the Dicks-Kelch doubles team defeated — and wore them down.

“They did some damage, they gave this Havre team all they could take,” Schwaderer recalled.

Taking the consolation bracket route to the state title was a difficult way to go, but Schwaderer is happy this group experienced it all.

“It was incredible, I’m just so proud of the guys for the way they were able to make it happen,” Schwaderer said.

Closing out this year is special for the team as this large group of seniors has been a close-knit, tennis-focused squad according to Schwaderer. For four years they have played together and improved with every match. The coach says a lot of teams would have folded in a tournament like that after entering the consolation bracket early on, but not the Bulldogs.

“To see the Bulldogs pull it together and plow through the tournament was really impressive,” Schwaderer added. 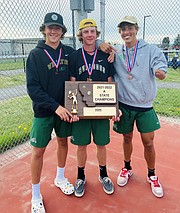