Nearly 300 firefighters have converged on the Flathead Reservation to battle the unconfined Elmo 2 Fire that has charred nearly thousands of acres in three days west of Flathead Lake.

Over Monday night into Tuesday morning, the fire had expanded to cover over 16,000 acres. The human-caused blaze started July 29 in grass and quickly expanded into thick timber west of Elmo and north of Montana 28.

The John Thompson Northern Rockies Team 7 took command of the fire 8 miles west of Elmo Sunday, utilizing attacks from the air and ground. As of Tuesday, at least one structure was lost and the fire remained in the timber north of Montana 28 and west of Black Lake.

Montana 28 reopened over the weekend, but drivers were urged to use caution due to smoke causing low visibility in the area. The Montana Department of Transportation was using pilot cars on U.S. 93 between Elmo to Rollins due to poor visibility.

According the the CSKT Division of Fire, Bitterroot Hotshots on Monday were working on the northwest portion of the fire, holding and improving existing lines. The efforts were supported by four scooper planes and four single-engine air tankers in the northwest.

Efforts on Monday were to focus on improving fire lines and building new fire lines when possible.

The total estimated cost of firefighting efforts reached $600,000 on Monday. The Elmo 2 Fire is the largest in the state.

Another day of critical fire weather fanned the blaze on Monday. Low humidity levels, temperatures in the mid-90s and winds gusts up to 25 mph in the afternoon were predicted.

While temperatures are expected to cool by the middle of the week, conditions will still be ripe for fire, the National Weather Service in Missoula warned.

"The gusty winds coupled with the dry conditions will be a recipe for new and existing wildfires to spread quickly," the Weather Service noted in its daily forecast.

"Forecast models continue to trend away from beneficial monsoonal moisture making it this far north, that were being advertised a few days ago. However, some locations across the area could see some welcome rainfall by this weekend, just not as widespread as previously thought." 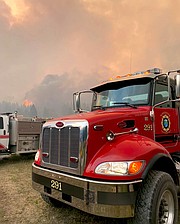