Broncs stumped as Whitefish football makes it two in a row

Whitefish senior Jaxsen Schlauch smiles after bringing down an interception against Frenchtown that secured the Bulldog win, 20-14, in the final minutes of the game on Friday in Whitefish. (Whitney England/Whitefish Pilot)

Bulldog Jaxsen Schlauch breaks through a tackle against Frenchtown in a game on Friday in Whitefish. (Whitney England/Whitefish Pilot)

Bulldog Bodie Smith makes a defensive tackle against Frenchtown with support from teammate Talon Holmquist in a game on Friday in Whitefish. (Whitney England/Whitefish Pilot)

Whitefish quarterback Fynn Ridgeway picks up yardage on a quarterback keeper play in the second half of a game against Frenchtown in Whitefish Friday evening. (Whitney England/Whitefish Pilot)

With the crowd roaring in the background, all-state receiver Jaxsen Schlauch reined in an errant pass between Broncs that sealed the big ‘W’ for the Whitefish Bulldogs in their home opener Friday night.

Following halftime the Whitefish defense stepped up and solved problems they had in the first half which carried the team through to another victory — the Schlauch pick was just icing on the cake. The Bulldogs won over Frenchtown 20-14 and improved to 2-0 on the season.

Bulldog head coach Chad Ross attributes a large part of the win to the defense’s second half adjustments and improved play.

“I thought our defense started off slow and then in the second half I think we held them down to 50 yards of total offense,” Ross said. “They did a great job of just responding to Coach Bollweg at halftime, we made a couple of adjustments and those really worked for us. That was huge just to see them come out and play with some confidence.”

In the first half the scoring started with a 23-yard touchdown pass from Whitefish quarterback Fynn Ridgeway to teammate Clayton Godsey in the second quarter. But the Broncs quickly responded with a touchdown reception by Devin Shelton to tie it at 7-7.

The scoring continued in the second quarter when Whitefish all-state receiver Bodie Smith wrangled a 33-yard pass for another score. Bulldog kicker Ryder Barinowski sent it through the uprights on both the first half touchdowns as well.

Just before the half Frenchtown quarterback Eli Quinn connected with Shelton again who outstretched the ball across the goal line.

On Whitefish’s first drive following halftime Schlauch caught a pass from Ridgeway in the end zone to give a narrow 6-point advantage that would hold up for the remainder of the game.

Ridgeway was intercepted twice, but Frenchtown’s Quinn also gave up two interceptions in the second half. Ross said that turnovers, both interceptions and on downs, were the main issue the offense is having so far this season.

Whitefish’s Cody Berry ran for 61 yards in the game; Smith caught seven passes for 112 yards. Ridgeway completed 21 of 32 passes for 247 yards and all three touchdowns. Though Smith and Schlauch, Whitefish’s two all-state receivers from last season, are among Ridgeway’s favorite targets, in this one he found several open guys.

“He (Ridgeway) did a great job of spreading the ball around,” Ross said. “I thought he did a great job of going through his progressions and seeing the field. Coach Roche has really been working with him on that, just taking what the defense gives you and I think he’s just maturing in that.”

Looking ahead, Ross is thrilled with the start his team has had to the season. He says getting two wins right off the bat against traditionally good teams is bringing up the team’s confidence and eagerness to win.

“I think it’s been a long time since we were 2-0,” he said. “It seems like the last couple years we’ve been fighting from the back end trying to make a run at the postseason… Now our expectations just seem to rise.”

Whitefish will hit the road this week to take on Butte Central on Friday in Butte.

Whitefish quarterback Fynn Ridgeway picks up yardage on a quarterback keeper play in the second half of a game against Frenchtown in Whitefish Friday evening. (Whitney England/Whitefish Pilot) 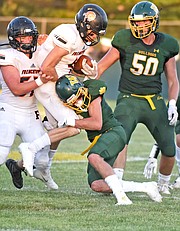 Bulldog Bodie Smith makes a defensive tackle against Frenchtown with support from teammate Talon Holmquist in a game on Friday in Whitefish. (Whitney England/Whitefish Pilot)

Bulldog Jaxsen Schlauch breaks through a tackle against Frenchtown in a game on Friday in Whitefish. (Whitney England/Whitefish Pilot)