The Whitefish cross country team was able to test its competitive strength individually and as a team at the Helena 7-on-7 meet held Thursday at Bill Roberts Golf Course in Helena.

With 44 teams from across the state competing in the unique meet, Whitefish runners had a good showing. The meet was set up with seven races in staggered starts, which pinned runners against opponents with similar season-best times. According to Whitefish cross country coach Richard Menicke the format of the races forced runners to pace themselves and not rely on running with their teammates.

“This was an important and different tune-up for the varsity teams as we prepare for the conference and state championships in the next two weeks,” Menicke said. “With one athlete in each race, the runners can’t rely on pacing with teammates and have to depend entirely on their feel for the race.”

As a team the Whitefish girls finished 16th with senior Paetra Cooke leading the way; she finished seventh in Race 3 and was the top Class A finisher in that race.

“Paetra Cooke had a fantastic race,” Menicke said. “Great start and aggressive running through the middle of the race, taking advantage of the hilly terrain.”

Whitefish’s Hazel Gawe placed ninth in Race 6 and Raiya McCutcheon placed ninth in Race 7 — both were the top Class A runners in each of those races. Morgan Grube also had a good time at 14th place in Race 4 and Rachel Wilmot took 22nd in Race 5 to round out the girls finishers.

The Whitefish boys team took 12th place in the overall team standings, with three runners getting top-six finishes. The Bulldog team tied with Corvallis for second in Class A behind Hamilton who was the top Class A school of the day.

Whitefish sophomore Mason Genovese placed third in Race 4 and sophomore Deneb Linton finished fourth in Race 3. Another sophomore Landon Brown was sixth in Race 6. Genovese was the top Class A runner in his race, while Linton and Brown both came in second among Class A athletes in their respective races.

“Mason Genovese ran the best race of his career, hanging with a lead pack of AA athletes and eventually passing a Hellgate runner near the end to finish third,” Menicke said. “I’ve never seen him look so tired after a race — a huge effort on a very honest course.”

He added that Linton had a similar effort in his race as he was with the lead pack of five runners through the first half of the race, but when the pace changed he couldn’t quite match the speed. Brown also hung with the front of the pack for most of the race and Menicke was impressed with his effort.

“He went for it and inserted himself near the front early and was able to hang on most of the way,” the coach recalled. “Love this kid’s energy and his ‘why not’ approach.”

Whitefish’s Barrett Garcia also had a nice race as he finished 11th overall in Race 5 and was third among Class A runners in that race.

On Saturday Whitefish cross country will compete in the Western A Fall Classic in Dillon. 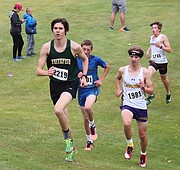 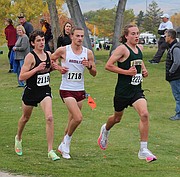