Bulldogs run out of time as Broncs end Whitefish’s season

Whitefish head coach Chad Ross shouts to his players on the field during a playoff game against Frenchtown on Saturday in Whitefish. (Whitney England/Whitefish Pilot)

Whitefish's Ty Schwaiger takes down Frenchtown running back Garrett Schmill in the backfield during a playoff game against the Broncs on Saturday in Whitefish. (Whitney England/Whitefish Pilot)

Whitefish players Jaxsen Schlauch (4) and Ty Schwaiger (23) celebrate with Bodie Smith (2) after he catches a huge pass in the end zone during a playoff game against Frenchtown on Saturday in Whitefish. (Whitney England/Whitefish Pilot)

The Whitefish Bulldogs waved farewell to another football season on Saturday after coming up short in a first-round playoff game against Frenchtown at Memorial Field in Whitefish.

Despite taking the lead when junior quarterback Fynn Ridgeway hurdled over the goal line early in the fourth quarter, the Bulldogs lost the game 24-13.

After touting a 7-0 record to start the season, the Bulldogs dropped their final three games. Whitefish finishes with a 7-3 record, the best the program has had since 2015.

Against Frenchtown the tale was similar to the losses to Columbia Falls and Polson the two weeks prior — Whitefish was right there within striking distance in the final quarter, but didn’t quite make the plays necessary to win.

“I feel like it’s deja vu from the last three weeks; I’m really proud of the seniors and their attitude overall,” Whitefish coach Chad Ross said. “Life’s full of difficult moments and just for them to be able to not point fingers, like hey we’re in this together…”

“It seems like in the last three games it’s who makes the biggest plays… Unfortunately the last three weeks we were just on the other side of it when it came down to it,” he added.

Whitefish was held scoreless throughout the first half and, after the Bulldogs fumbled in the red zone on third down, Frenchtown drove the field. The Broncs took a 7-0 lead into the break after their drive resulted in Bronc Garret Schmill’s short run into the end zone.

To begin the third quarter, Whitefish kicked off to the Broncs who drove the field to the 23-yard line where Frenchtown kicker Matt Kleinsmith put a field goal through the uprights. Though the Bulldogs were moving the ball, they didn’t find the end zone until midway through the third quarter when Ridgeway found Bodie Smith at the end of his route in the end zone for a 29-yard touchdown reception.

Smith’s touchdown reception was on fourth and short, and the Bulldogs decided to go for it rather than kick a field goal. This was one fourth-down conversion of two that were pivotal for Whitefish.

“Fynn’s (Ridgeway) leadership and Tanner Harmon (senior lineman) — they’ve become such students of the game in being able to read it,” Ross said. “We performed when we needed to on that drive.”

After the touchdown, the momentum was building for the home team.

With seconds remaining in the third quarter, Bulldog Jaxsen Schlauch made a big time interception which gave the ball back to Whitefish to start the fourth quarter.

Whitefish again converted on fourth down and the drive ended in a touchdown when Ridgeway hurdled over the goal line to give the Dogs their first lead of the game at 13-10. The extra point by Whitefish’s Ryder Barinowski was no good after the referees called an offsides on Frenchtown which made Whitefish have to redo the field goal attempt.

After taking the lead late in the game, Ross said in that moment he felt the Bulldogs would come out on top.

“I really thought we were going to win this one,” he said.

On Frenchtown’s next opportunity though, the Broncs connected on some long-range passes to move down the field quickly. That ultimately resulted in Frenchtown’s Peyton Hicks punching in for the go-ahead touchdown.

Whitefish’s following drive resulted in a fumble by Ridgway as he attempted a pass, though from the sidelines Bulldog coaches argued his arm was in forward motion before the ball came loose which would have made the play an incomplete pass versus a turnover.

The ruling on the field stood, and it gave Frenchtown another chance; Hicks then scored again to seal the Broncs’ win.

After the final whistle both teams showed good sportsmanship and the Broncs supported Whitefish’s seniors as they took their final walk down the field.

“Frenchtown, Coach Nelson does a great job,” Ross said. “Good kids, classy and respectful. So that was really cool to see.”

Ridgeway finished the game completing 19 of 36 passes for 182 yards, one touchdown and threw one interception; he also ran the ball for 48 yards and a touchdown. Senior receivers Smith and Schlauch led their team in receiving, with 52 and 47 yards respectively.

“Ashton Akey, I thought he had a really good game, one of the best,” Ross said. “He’s been starting for three years and is a leader on our line. I just like to see the personal growth in players… they come in as kids and they leave as young adults, that’s fun that I get to be a part of that.”

For Ross, the toughest part is to see the large group of seniors play their final game on Memorial Field.

“For some of these guys it will be the last time they ever play,” the coach added. “To go 7-0 and then lose the last three games it’s just heartbreaking.”

Earlier in the season Whitefish beat Frenchtown 20-14, but the Broncs came out on the right side in this one.

Although that wasn’t the ending Whitefish hoped for, Ross is glad for the memories and proud of the accomplishments his team had this season.

“We just kept fighting and going, and they kept believing in each other,” he said.

Whitefish graduates 15 seniors, but the coach is confident that the players coming back next year will be ready to continue the success from this season. 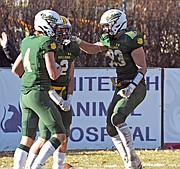 Whitefish players Jaxsen Schlauch (4) and Ty Schwaiger (23) celebrate with Bodie Smith (2) after he catches a huge pass in the end zone during a playoff game against Frenchtown on Saturday in Whitefish. (Whitney England/Whitefish Pilot)

Whitefish's Ty Schwaiger takes down Frenchtown running back Garrett Schmill in the backfield during a playoff game against the Broncs on Saturday in Whitefish. (Whitney England/Whitefish Pilot)

Whitefish head coach Chad Ross shouts to his players on the field during a playoff game against Frenchtown on Saturday in Whitefish. (Whitney England/Whitefish Pilot)