Bulldog Aaron Dicks plays in a doubles match against Polson at the Northwestern A Tennis Divisional Tournament in Polson on Friday. (Whitney England/Whitefish Pilot)

The Whitefish boys tennis team outperformed all expectations at the Northwestern A Divisional Tournament in Polson last week.

The Bulldogs won the boys title with 61 points with Columbia Falls in second scoring 31. Through Whitefish’s excellent play, six athletes ended up qualifying for the state tournament.

“I’m incredibly excited about how the team did,” Bulldog head coach Chris Schwaderer said. As a coach we always try to do the most we can to get everyone prepared and ready to go and ultimately it comes down to who’s going to show up.

“I just think that everyone was ready and they’re at the top of their game… we certainly achieved at about as high of a level as we could have hoped,” he added.

Whitefish’s No. 1 singles player and senior Jayce Cripe was the favorite to win in the tournament, but he was certainly tested over the course of several matches. Cripe defeated both Columbia Falls and Ronan players easily on the first day of the tournament, then on day two Ronan’s Dillon PrettyOntTop challenged him slightly before Cripe found himself knotted up with a familiar foe of Columbia Falls’ Niels Getts for the championship match.

According to Schwaderer, Cripe fought off several match points in the grueling three-set match, but kept his cool as he won 6-3, 2-6, 7-6(7) over Getts.

“Jayce Cripe came out with the singles championship which is huge,” Schwaderer said. “The fact that he rallied and pulled it out just showed so much guts and determination; it was scary, but he just kept fighting off match points and pulled that one out.”

In addition to Cripe’s championship victory, Whitefish’s No. 2 singles player Joe Brandt took third in divisionals and will be competing at state this week. At divisionals Brandt lost to Getts in the semifinals, but bounced back by defeating teammate Jesse Burrough in the consolation semifinals before winning 6-2, 6-4, over Libby’s Michael Hollingsworth in the third-fourth place match.

Burrough also outperformed expectations by coming into the first round and defeating a top player, Ryker McElmurry, out of Libby.

“Jesse Burrough, he’s a freshman and he went in as our No. 4 singles player,” Schwaderer said. “Jesse just went out and took him down in the first round and that really set a tone I think for what we were going to do. It was a huge match, an underdog and he just scrapped it out and won.”

On the doubles side, Schwaderer said he was impressed with all three teams he took to the divisional tournament. Whitefish’s No. 3 doubles team of Fin Stagg and Austin Gunset also came out and won their first-round match unexpectedly. Although that No. 3 doubles team went far in the tournament, a huge performance from Whitefish’s No. 1 and No. 2 doubles earned both pairs a trip to state.

“I’ve never taken two doubles teams to state before,” Schwaderer said. “They just achieved at a high level and it was so much fun to see them come together. I can’t be happier for this group and I’m excited to see what we can possibly do at the state meet.”

The No. 2 team of Jack Robertson and Mason Kelch fought their way into the third-fourth place match and defeated Columbia Falls’ No. 1 team of Cody Schweikert and Cade Morgan 7-5, 7-5. The Bulldog’s No. 1 team of Aaron Dicks and Highland Lee-French also showed poise throughout the tournament, only losing in the championship match by a few points.

“(Highland and Aaron) have had a really strong run this year and had a strong run through the tournament,” Schwaderer said.

Lee-French and Dicks got into the championship match against Polson who was the No. 1 seed in the tournament for doubles. Whitefish jumped out to a 6-0 first set, but after that it was tightly contested resulting in a 0-6, 7-6 (7-5), 6-4 Polson victory.

“Unfortunately we dropped a close one, but I have a lot of confidence in them as a team going into the state tournament,” Schwaderer said. “I think it was probably a good wake up call just to realize sometimes they need to close the deal when they get up. It was probably a valuable lesson that might help us going into the next level.”

Schwaderer says the Bulldogs are looking forward to taking a deep, six-man squad to the state tournament this week, but the strength of teams on the east is largely unknown to Whitefish. Regardless the athletes are raring to go.

“It’s kind of a mystery, we just don’t know what things look like in the east, we never really see teams out of the east,” Schwaderer said. “We don’t know what we’re going to get, we know there are a lot of evenly matched teams; I think good things can happen if we go in prepared and have a lot of confidence.”

Whitefish will head to Billings to compete at the Class A State Tournament beginning on Thursday. 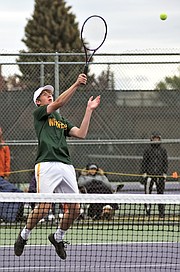 Bulldog Aaron Dicks plays in a doubles match against Polson at the Northwestern A Tennis Divisional Tournament in Polson on Friday. (Whitney England/Whitefish Pilot)