Volunteers work to repair the Werner Peak Lookout which sits at an elevation of 6,960 feet in the Whitefish Mountain Range with uninterrupted views of the surrounding peaks and valleys. (Whitney England/Whitefish Pilot)

A view from the Werner Peak Lookout wrap around deck. (Whitney England/Whitefish Pilot)

Werner Peak Lookout sits at an elevation of 6,960 feet in the Whitefish Mountain Range with uninterrupted views of the surrounding peaks and valleys. (Whitney England/Whitefish Pilot)

Fire lookouts have a story — a memory of the people and events of the past.

The Werner Peak Lookout is among the fire lookouts in northwest Montana that still stand and part of restoration efforts by a nonprofit that’s goal is to keep such structures viable to carry on that legacy.

The Northwest Montana Lookout Association, which is dedicated to restoring and preserving fire lookouts and other support structures on public lands, recently spent a weekend at the drive-to lookout replacing decking and repainting the structure to maintain its beauty as a pinnacle atop the peak.

The work of the small volunteer crew at the Werner Peak Lookout might seem minuscule compared to some of the full restoration efforts or rebuilding an entire wall at some of the more remote structures that the NMLA works on, but according to the Werner Peak project leader and board member Rick Davis the maintenance of the structure is vitally important to keeping the lookout in top shape.

“Maintenance is very important; the reason (Werner Peak Lookout) is in good shape is it's been maintained,” Davis said. “We’ve made an agreement with the [state Department of Natural Resources and Conservation] that every year we’ll come up and do something to keep it up to this standard.”

Werner Peak has had multiple structures built on it over the years, the first was a log cabin in 1911 located 1 mile east of the summit and another log cabin was added to the summit in 1914. A 10-foot pole tower was constructed in 1941, then replaced in 1983 by the current two-story concrete tower. For emergencies, the lookout can still be staffed and is also available as a rental throughout the summer by the Stillwater State Forest.

The 6,960-foot high summit of Werner Peak towers over the valleys in all directions and offers a surround-view of the seemingly endless peaks. The structure itself has a supply room on the ground floor and up a narrow staircase, a wraparound deck surrounds a room enclosed from the elements but with windows that hardly interrupt the view.

For those involved in the NMLA, preserving the lookouts across northwest Montana is important because the structures are of great historical significance. According to Davis, who along with his wife Marli has been traveling to lookouts since the 1970s, each time they travel to a place such as Werner Peak they are reminded of the stories that came before them.

“There’s just so much history tied to them… people came here back in the 30s and 40s to picnic and such,” Marli said.

In addition to the physical restoration projects, the NMLA is also doing an oral history preservation project which is dialoguing the memories of former lookout personnel and their family members. Those stories tell a rich history of the importance the structures had historically, but Rick Davis says he can see the story of the actual structure unfold just by physically replacing boards or windows on a lookout.

“I think working on these, you see the wood itself has a memory to it,” he said. “In other words, there will be 20 years ago one of the corners shifted and the lookout dropped on that side a little bit, then all the boards are like that.”

Rick and Marli Davis estimate they have helped restore over 20 lookouts in the nine years since NMLA formed as a nonprofit organization. In the years leading up to the organization forming, the Forest Service was getting volunteer groups together to work on the lookouts and the NMLA formed naturally out of those first efforts.

Now the NMLA works in partnerships with agencies like the DNRC, Kootenai National Forest, Glacier National Park and Flathead National Forest. Each year the nonprofit works with the agencies to determine which lookouts require restoration work and what is doable for that year.

“We have a really good relationship in that manner,” Rick said. “When you deal with agencies it can be frustrating, but this has not been that way at all. I think it's because we’re not taking away anyone’s job, these are things that wouldn’t get done necessarily until maybe it’s too far gone.”

At the Werner Peak project, this year Rick and Marli Davis were joined by two volunteers that are new to the organization. Barbara Boorman and Barb Hvizdak both said they wanted to get involved because of their love for the outdoors and a chance to preserve the history of an important structure.

For Boorman, she’s been traveling to Werner Peak since she was a little girl and her father was the head of a forest fire protection agency.

Marli Davis says she keeps coming back year after year to volunteer for the association because preserving the history of the lookouts is so important. Rick Davis likes seeing the project through knowing he contributed to keeping a legacy alive.

“This has got a start, a middle and an ending — then you’re done and it looks good,” he expressed. “You’ve contributed, there’s closure and I’m doing something for a legacy that's important to me.”

In addition to Werner Peak, the NMLA is also working on or assessing seven other lookouts this summer. Without the work the nonprofit does each year, Rick and Marli Davis believe many of the lookouts would eventually break down and become unusable.

“We care about them and we respect what these lookouts go through,” Rick Davis said.

Werner Peak Lookout sits at an elevation of 6,960 feet in the Whitefish Mountain Range with uninterrupted views of the surrounding peaks and valleys. (Whitney England/Whitefish Pilot)

A view from the Werner Peak Lookout wrap around deck. (Whitney England/Whitefish Pilot) 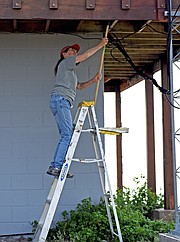