Entrepreneurship at heart of sixth-grade program

The winning team, Ceres, shows off their dressing and marketing designs after being announced the champions of the Salad Dressing Tournament at the CSE. From left to right, Cael O'Brian, Alina Pohlman, Jaclyn Tucker. (Whitney England/Whitefish Pilot)

Mixing up salad dressings as part of a multi-day learning program recently offered sixth-grade students the chance to learn much more than the five basic tastes.

Over the past couple of months sixth-grade classes from Whitefish Middle School each spent a week at the district’s Center for Sustainability and Entrepreneurship working in small groups while learning the process of creating a salad dressing and then forming a business designed around selling that dressing.

Each team devised its own “Shark Tank” style pitch and presented it at the Salad Dressing Tournament. Finalists from each class qualified to recreate their dressing and pitch their business to a panel of local chefs for a chance to have their creation featured at the Craggy Range in Whitefish.

Four groups competed in the final runoff recently. Team Ceres from teacher Shawn Lenzner’s class was declared the winner with the judges loving their slogan, “A dressing fit for the Gods.” The team comprised of Cael O’Brian, Alina Pohlman and Jaclyn Tucker said they based the name for their mock company off the Greek goddess of agriculture, Ceres, to highlight the sustainable organic foods they used to create it, many of them found in the greenhouse at the CSE.

Other teams used poster board presentations, matching outfits, and promotional marketing materials to make their vision for their salad dressing companies come to life.

Randy Hohf, the CSE education coordinator, said this is the first year the classes were able to hold the tournament after last year’s was canceled when schools were closed due to COVID-19.

“It’s cool to see them do a multi-day project like this, and very student centered where we just guide them through the process,” Hohf said. “They don’t often get to do project based learning like this so it’s a great experience.”

The process included learning firsthand how to make a basic vinaigrette dressing, then each group adapted the recipe by adding different ingredients to make their own creations. Every team created a mock business with its own logo and mission statement and finally imagined their own marketing strategy and pitch.

The fifth grade does a similar entrepreneurial focused project by growing microgreens and creating a business to sell at a Farmers Market at the CSE. Prior to the entrepreneurial projects, classes from grades first through fourth come to the center for up to five days out of the school year and progressively learn about soils, pollinators, insects, sustainably growing food and natural ecology.

“It [the CSE] really engages some kids who don’t engage very well in a classroom setting,” Hohf said. “You bring them over here and they’re playing with soil, they’re going out in the greenhouse, during the spring and fall they get outside — they just come alive.”

For the fifth- and sixth-grade programs especially, Hohf believes the entrepreneurial component is invaluable. He says it sets the students up for high school and business classes. Plus it gives them a real sense of accomplishment.

“It’s very authentic learning; in fifth grade they really do a market and make money, and they give that money to local nonprofits,” Hohf said. “And in sixth grade it’s really authentic because they’re going to have a salad dressing featured in a local restaurant.”

“For the most part the kids see that they’re doing something real with local community partners, so it’s not removed from real life,” he added.

The programs taught at the CSE are not part of the schools official curriculum standards and Montana does not fund sustainability programming or teachers, whereas some other states do according to Hohf. Whitefish’s CSE came about through private donations and the programming is still funded through those initial funds.

However, Hohf said, in the center’s third year the administrators are on board and almost all teachers of first through sixth grades are also choosing to participate in this valuable educational programming being offered. He added that through the programs he’s developing he is also trying to tie in typical core subject standards so the students stay on track with their regular classroom learning.

“The teachers have been really supportive, they see the value in it,” Hohf said. “We hope eventually that this just becomes what they do as part of their curriculum.”

The Center for Sustainability and Entrepreneurship opened in April of 2018 and since then the Whitefish School District has been working to create programming that benefits the students and local community. The Salad Dressing Tournament is an example of a program that teaches the main concepts the center strives to instill in students, Hohf notes.

“We identified five areas when we first started developing our mission for this programming in the center — sustainable agriculture, natural resources, energy because it’s a net-zero building, community resiliency and then sustainable entrepreneurship,” Hohf explained. “So it’s pretty much in all areas of life, community and economy.”

Hohf, who is working part-time as the CSE educational coordinator and part-time as a high school science teacher, hopes the programs will continue to develop. He’d like to form an entrepreneurial based program for the seventh grade as well, and also continue to advance the current programs. The way he sees it, the hands-on approach that the center offers cannot be replicated inside a typical classroom.

“CSE programming is developing kids that are very aware of their environment and aware of environmental impacts on every decision they make and everything they do in life,” Hohf said. 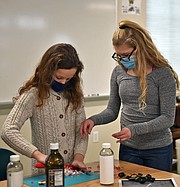 The winning team, Ceres, shows off their dressing and marketing designs after being announced the champions of the Salad Dressing Tournament at the CSE. From left to right, Cael O'Brian, Alina Pohlman, Jaclyn Tucker. (Whitney England/Whitefish Pilot)