Whitefish's Anyah Cripe hits a return during a match against Flathead High School on Friday at FVCC. (Whitney England/Whitefish Pilot)

In an active week for girls tennis, Whitefish was pushed by three opponents and came out on top of Polson and Ronan while dropping one to Flathead.

In doubles the No.1 team of Ali Hirsch and Tallory Workman put together a clean match winning 6-1, 6-1 and the other Whitefish doubles teams won by forfeit.

Against Polson the Lady Bulldogs had to put in a great effort to defeat the Lady Pirates, who are the team Dryden says is most likely the favorite to bring home the state championship this season.

“Anytime you beat Polson in tennis you’ve got to feel pretty good about it,” he said. “However I’m very realistic that they still are the favorites to win the state championship… The power that they have in the doubles is really what’s going to make them the favorite to win the title.”

He added though that Whitefish pulling out all four singles matches was certainly a highlight.

“Sweeping the singles was a little bit surprising,” Dryden said. “We won a couple of very tight matches and I’m sure we’re going to run into those matchups again at divisionals.”

Smyley again led the girls tennis singles lineup for Whitefish defeating Polson’s Berkeley Ellis 6-2, 6-3. Dryden says Ellis is one of the best doubles players in the state, but wanted to see how she measured up with Whitefish’s Smyley, the defending State A girls singles champion.

Anyah Cripe and Lauren Brown at the No. 2-3 spots fought through challenging matchups against Polson and at No. 4 singles Emma Shaffer defeated Polson’s Sarah Kinzle in a long match, 6-4, 7-6 (2).

Later on in the week Whitefish took on Class AA Flathead which served the Lady Bulldogs their first loss of the season.

Smyley’s record remained untouched as she won without even dropping a game during her match, but the rest of Whitefish’s singles lineup didn’t fare as well — Cripe, Brown and Shaffer all fell to their Flathead opponents. Cripe’s match against Bravette Avery Cherot went to three sets though where she narrowly lost, 6-2, 6-7 (4), 6-4.

At doubles, Dryden says the biggest highlight of the day for the team was the Hirsch-Workman No. 1 doubles team. The pair defeated their Flathead foes in two sets, 6-0, 6-3.

“The highlight for us easily was Ali Hirsch and Tallory Workman, they truly picked it up,” Dryden said. “They had a disappointing match against Polson on Tuesday so that was a real confidence builder. It seemed like Tallory’s serve was clicking and Ali was very dominant at the net.”

Whitefish is heading into a busy week. The Lady Bulldogs were set to play Columbia Falls on Tuesday after press time. Then will take on Glacier at FVCC on Thursday; the girls will travel to Hamilton and Corvallis on Friday. 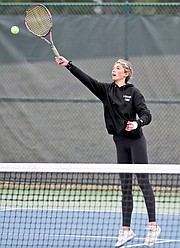 Whitefish's Anyah Cripe hits a return during a match against Flathead High School on Friday at FVCC. (Whitney England/Whitefish Pilot)