Fynn Ridgeway with a throw against the Wildcats. (Chris Peterson/Hungry Horse News)

The Bulldogs forced their opponent into seven turnovers, with all but one coming as interceptions. Whitefish’s defensive line pressured Columbia Falls quarterback Mason Peters all night, and Bulldog head coach Chad Ross attributes the biggest difference in the game to the adjustments made on defense.

“Brett Bollweg, our defensive coordinator, just put together a really good defensive plan,” Ross said. “Our defensive backs and linebackers were in the right spot and caused a lot of turnovers. So that was huge.”

After nabbing a couple interceptions early in the game, Whitefish took a 7-0 lead in the second quarter after sophomore running back Ty Schwaiger finished the Bulldog drive with a two-yard touchdown run. Whitefish kicker Ryder Barinowski easily added the extra point.

Schwaiger was the Bulldog to again find the endzone in the third quarter, this time on a spectacular 26-yard rushing touchdown. Schwaiger busted through the holes of the Columbia Falls defense and put it away with true speed.

Since getting the early lead, Whitefish’s offense played a conservative second half by keeping the ball on the ground for the most part. Also in the third quarter, senior tight end Trey Hunt picked off a short pass from Peters headed toward the sideline and ran it back 36 yards for the touchdown.

“Just the defensive line and the secondary in general (stood out),” Ross said. “Trey Hunt did a great job, he had a pick-six and that was huge in a game like that.”

Columbia Falls’ Peters connected with Taylor Bryan on a 30-yard touchdown pass in the fourth quarter, but it was a story of too little, too late for the Wildcats.

Whitefish finished with 166 total yards to Columbia Falls’ 277 yards, but the turnovers were the biggest factor in the game.

Whitefish cleaned up its turnover issues from its previous two games against Libby and Polson, finishing the game with two interceptions. Meanwhile the Wildcats struggled, recording five interceptions and one fumble.

The Bulldogs recorded 125 rushing yards with just 41 passing yards, but Ross said Whitefish quarterback Fynn Ridgeway had a minor hand injury so the coaches chose to keep the play calls on the ground as much as possible.

“We played better defensively and it allowed us to be a little more conservative offensively,” he said. “We did what we needed to do on the ground.”

Putting away the rivalry game and improving to 1-2 on the season was a welcomed boost for the Bulldogs.

“It’s always good to get one against them,” Ross said of the win over Columbia Falls. “That felt really good, and to do it at home in a season that we thought we might not have. So to be 1-2 it’s a big one.”

Whitefish is set to host Browning at the Dawg Pound on Thursday evening at 7 p.m. in another conference matchup game. 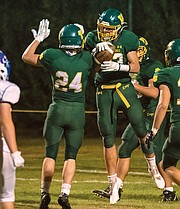