Six youth from the Glacier Nordic Ski Team traveled to McCall, Idaho on Feb. 29 and March 1 for the Intermountain Division of the US Ski and Snowboard Youth Champs races.

The races attracted more than 175 skiers from Montana, Idaho, Washington, Utah, Wyoming and Alaska. Youth Champs is the largest regional racing event for U14 cross-country skiers. Racers could enter three races starting Saturday with an interval start freestyle or skate race followed by a skier cross event. The skier cross was a downhill race, combined with obstacles, features and jumps, raced on skate skis. Sunday finished with a mass start classic race. Saturday night’s cold temps led to icy, fast, klister conditions and quite a few falls on course on Sunday.

The U14 girls — Signe Ebett, Maeve Ingelfinger, Charlotte Lehman and Iona Sarraille — all had solid finishes throughout the weekend racing in a tough field of 45 girls. Maeve Ingelfinger won the skier cross and scored a third place podium spot in the classic race. The boys were represented by Henry and Colter Tate in their first Youth Champs. 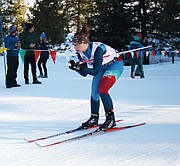 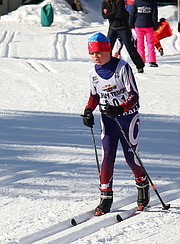