The Glacier Nordic Ski Team is home from their final Junior National qualifying weekend of the season.

The races were held on Friday, Feb. 14 and Saturday, Feb. 15 in Midway, Utah, at the Soldier Hollow Nordic Center, site of the cross-country ski competitions at the 2002 Winter Olympics in Salt Lake City. The races served as a qualifier for not only the Intermountain Division, but for the Rocky Mountain and Pacific Northwest Divisions as well. The University of Utah simultaneously hosted their collegiate invitational, adding to the enormous size of the event. Close to 800 athletes from all over the western half of the United States traveled to Midway for the competition.

Friday was an individual start skate-technique distance race. The sky was blue and the man-made snow on the racecourse was fast and furious. Starting off the weekend for Glacier Nordic was Winslow Nichols, who, competing in the U18/U20/Senior Male category, raced the longest distance with the largest field size of the weekend. Nichols skied three laps of a 3.3km loop that included the notorious Hermod’s Hill, the largest climb of the Olympic 5k. Winslow finished this arduous race 134th in a highly competitive field of close to 160 athletes.

Saturday’s event was also a distance race, however, unlike Friday, the races were classic-technique, and rather than starting individually, were mass start, meaning all athletes in a single age class started at the same time in one large group. For Winslow, this meant starting alongside more than 150 other racers. The coaches grabbed spare poles and stationed themselves along the course as the athletes took their positions in the start area. The gun sounded and the gigantic mass of skiers made their way up the Hollow and around the same course as the day before.

Nichols managed to keep all equipment in one piece and finished the race in 139th.

Racing a slightly different course as the previous day but still 5km, Isabelle Cooke finished 47th out of 88. Jacob Henson finished 11th, Ruedi Steiner was 23rd, and Nate Ingelfinger came in 46th out of 99 in their overall age class.

These races were of particular importance for Henson and Steiner, who both went into the weekend sitting in a JN qualifying position. Ruedi Steiner’s overall finishes this weekend were seventh and 12th place on the IMD points list. These results put Steiner at 12th in the overall rankings for U16 Males this season, earning him a spot as first alternate for JNs. Jacob Henson’s overall results were fourth and fifth place finishes on the IMD points list and were more than enough to earn him a spot on the JN Team.

Henson is the first GNST athlete to qualify for the Junior National Championships in nine seasons. He will be traveling to Truckee, California, the first weekend of March to compete with the best junior cross-country ski racers in the country. Racing will begin Monday, March 9. 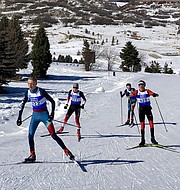